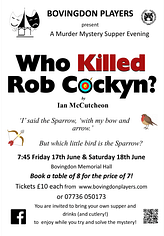 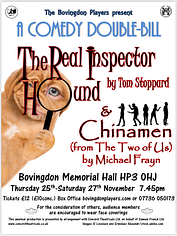 Our next production will be The Veil by Conor McPherson.

Set around a haunted house hemmed in by a restive, starving populace, The Veil weaves Ireland's troubled colonial history into a transfixing story about the search for love, the transcendental and the circularity of time.

May 1822, rural Ireland. The defrocked Reverend Berkeley arrives at the crumbling former glory of Mount Prospect House to accompany seventeen year-old Hannah to England. She is to be married off to a marquis in order to resolve the debts of her mother's estate. However, compelled by the strange voices that haunt his beautiful young charge and a fascination with the psychic current that pervades the house, Berkeley proposes a seance, the consequences of which are catastrophic.

Mrs Goulding - a housekeeper and nurse

Auditions will be from 8.30 pm at the Bovingdon Memorial Hall on Thursday 8th December, with a view to casting before Christmas, then rehearsals will run from January up to the performances at the end of March.  If you want to join in, either to read some parts, offer backstage help or just to find out more, please let John Mower, the director, know you’re coming (j.mower@herts.ac.uk).

At last, in November 2021 the Bovingdon Players returned to the Memorial Hall with a double-bill of classic comedies:-

Chinamen (from The Two of Us) by Michael Frayn

In June 2022 we staged another of our murder mystery evening shows, the bizarre tale of a duplicitous fish and chips mogul and his untimely demise.  Great fun was had by all!

Bring your remaining turkey sandwiches and your thinking caps to our Quiz Night on Saturday 7th January at 7.30pm at the Memorial Hall.

Tickets are £40 for a team table of up to 8 people, while smaller groups can be slotted in for £7 a head.  This is a ‘bring-your-own-refreshments’ event, so don’t forget the glasses, plates and cutlery!  Get you teams together and your bookings in soon as there are limited numbers for this event!